There are problems that we really would like to have in Germany, Austria or Switzerland!

While women in top management positions are in short supply in these countries, the Ministry of Public Administration in Paris had to pay a fine of 90,000 € for hiring too many women in management positions. This would discriminate against men, the public employer was accused.

In 2018, the city of Paris advertised a total of 16 new management positions. 11 of them went to women and five to men, reports the AFP news agency. This corresponds to a female quota of 69% and a male quota of 31%. In France, however, there is a requirement that at least 40% of the positions must be filled by members of one gender.

Anne Hidalgo, the socialist mayor of Paris, describes the fine as “absurd” and announced that she would hand over the check in person together with her female executives.

We Fondsfrauen believe that gender equality naturally works in both directions. But in the end, we envy the city of Paris a bit for having the problem this way and not the other way around. 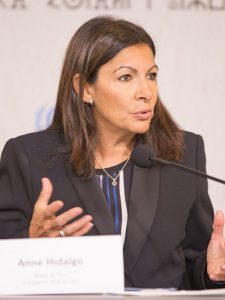