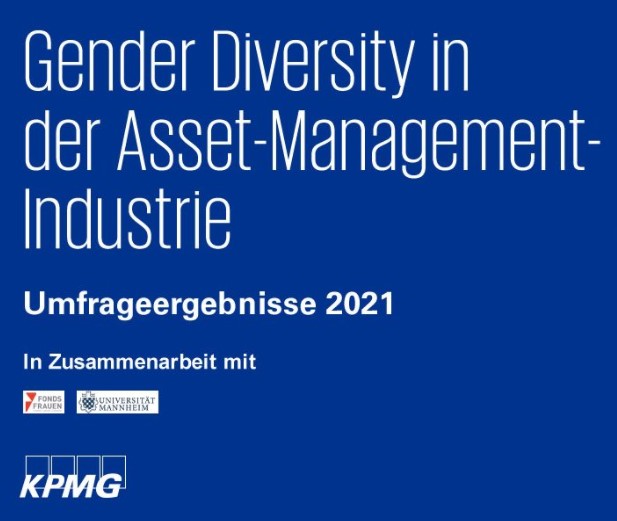 Now in its third round, Fondsfrauen - together with KPMG and the University of Mannheim - conducted the study"Gender Diversity in the Asset Management Industry". The results show: There is a slight improvement in gender diversity in the financial industry, but only in nuances. There have been no landslide movements since the last two surveys were conducted in 2015 and 2017.

One important finding of this year's study is that the proportion of female applicants, at 26%, is still significantly lower than that of male applicants. This shows that female employees apparently do not consider the asset management industry as a potential employer often enough. Here, companies are challenged to provide female employees with a good and workable work environment in which they can fully utilize their skills. Fondsfrauen supports these efforts through its Young Professionals initiative, through which we inform young women about the finance industry and show how diverse and interesting the jobs in it are. We also encourage young women to exchange ideas with each other, for example through our digital lunch talk on July 29, 2021 "Young Women in Finance" and events at universities.

Here you can read the article of the Handeslblatt about this study.

One exception to this observation is the significant increase in the proportion of women on the Executive Committee. In 2015, there were only 8% women on this committee, and the proportion has now risen significantly to 17% in fiscal 2020. This is a good development, as it shows that women are competent where function-related work is carried out and that companies are happy to employ them.

The survey results also show that there are still many women in the so-called "pink ghettos": 81% of women work in HR departments, 67% in compliance, and 57% in marketing. In contrast, only 21% of women find their way into portfolio management, 22% into IT and 25% into sales. However, there is a decreasing trend here, i.e. the extent of the "pink ghettos" is decreasing over time - in 2015 it was significantly higher.

43% of women work part-time
The study reveals a clear difference in the choice of work volume: in 2020, 43% of female employees worked part-time, while only 7% of male employees did so. For both women and men, the part-time rate increased significantly compared to 2015.

There are also clear differences between female and male employees in how long they take parental leave after the birth of a child. 83% of employees who became mothers in 2020 took parental leave for more than six months, but only three percent of fathers.

Support instruments yes, fixed quota systems no
On the positive side, it can be seen that the companies are making efforts to recruit female employees and have implemented various support instruments for equality. These range from the promotion of female employees in high potential or fast track programs to the hiring of a diversity officer and the promotion of in-house and external women's networks. However, the majority of these are "soft" measures rather than the implementation of fixed quota systems.

It was apparently easier to determine the variable annual compensation between male and female employees within a company. There were significant differences here: at the 2nd management level, the difference was around 30%, and at the 3rd level, around 40%. This is an indication that women negotiate their bonuses to a lesser extent than men.

Not nebulous, but specific!
In summary, there have been only gradual, but not grandiose changes with regard to women in the financial industry over the past five years. Also, only a few asset managers are affected by the legal quota for women on the supervisory board and management board. The question remains as to what companies can do to make more progress in this area.

The Fondsfrauen have drawn up for this purpose a list of demands.Three things are important in that:

Companies need not fear that they are showing themselves up short. For one thing, most of their competitors are not much further ahead, and for another, it is commendable when it is apparent that a company is seriously addressing the issue of gender diversity. Ultimately, it will not only be to the advantage of women in the industry, but also to the advantage of the companies themselves, because in the end, diverse teams lead to better results - as various studies have shown.

We would like to take this opportunity to thank Maren Schmitz, Partner Financial Services at KPMG, for sponsoring the implementation of the study. We would also like to thank Prof. Dr. Alexandra Niessen-Ruenzi from the University of Mannheim for her competent implementation and preparation.