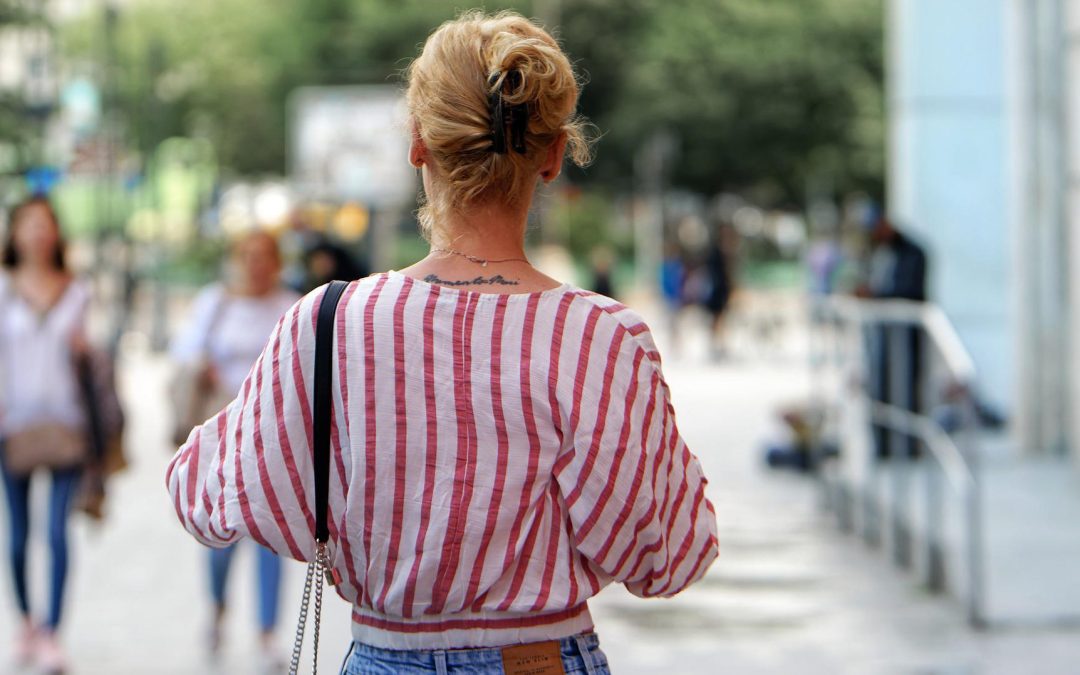 Since the last MetallRente Youth Study 2019, the Corona pandemic has turned the lives of young adults upside down. "The vast majority of young people are still saving. However, we also see important changes. Young adults' optimism about their personal lives is dropping, confirming a general trend that was already apparent before Corona. Young adults have a realistic view of their retirement planning. More than ever before are investing their money in stocks and funds. This is because the fear of poverty in old age is present. At the same time, expectations of politicians to provide adequate pensions for their own generation continue to rise," stresses Klaus Hurrelmann, scientific director and, together with Heribert Karch and Christian Traxler, editor of the study. Karch criticizes the reform process, which has been going on for more than 20 years: "Regular old-age provision reaches only a minority of young adults. A proportion simply lack the means to do so."

Saving is normal for the majority

86% of all 17- to 27-year-olds save either regularly or from time to time. But the representative survey also shows that one in seven young people (14 %) does not save. This is mainly because this group usually needs all its money to live on and has no financial leeway to save.

Fear of old-age poverty is high among young people

Three quarters (78%) of 17- to 27-year-olds are worried about receiving only a low pension in old age and being poor. It is also striking that the fear of poverty in old age is more prevalent among young women, at 84%. But even among young men, three out of four (74%) worry about not having enough money to live on in old age. 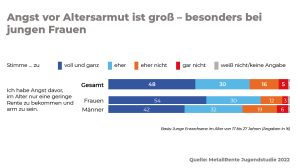 Despite High Awareness of Retirement Provision - Saving for Retirement Provision Does Not Advance
Nine out of ten (90%) young adults are aware that they need to make additional provisions to protect themselves against poverty in old age. Compared to this high level of awareness, however, the number of those who actively make provisions is relatively low. Half (51%) of 17- to 27-year-olds put money aside for old age at least occasionally. But only 37% save regularly for this purpose. Of those who are in a good financial position, more than 60% make provisions. The situation is much worse for those who describe their financial situation as poor. In this group, only a quarter (26%) manage to put money aside for retirement. 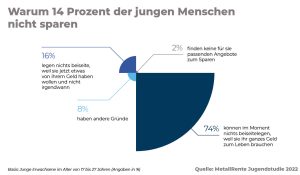 Young people see it as the State´s duty
Young people clearly reject an increase in the retirement age. Only 23% would be prepared to work longer than until the age of 67 if this served to secure pensions in the long term. The vast majority of young people demand that the state assume its responsibility for the old-age provision of their generation. "If politicians really want it, there can still be a good state pension in the future," is now the opinion of nine out of ten (88%). In 2010, the figure was only 74 %. This expectation is coupled with a generally high level of trust in the state pension. 58% of young adults trust it "somewhat" or "completely. They also have a high level of trust in company pension plans (49%) and life insurance policies (46%).

Young people focus on returns - but do not want to forego sustainability
More young retirement savers than ever before are investing money in shares and funds. Compared with 2016, their share has more than tripled - from 16% to 50%. However, there are clear differences between the genders. Almost two-thirds of young men (62%) also save for their retirement with shares and funds. Among women, the figure is just one-third (34 %) - but this figure has also almost doubled since the last study in 2019.

Other forms of savings such as fixed-term deposits (49%), home savings contracts (38%) or Riester pension contracts (22%) are becoming increasingly unattractive in the ongoing low-interest phase. Only occupational pensions remain stable in terms of popularity among young people. Slightly more than one-third (37%) provide for their old age through company pension plans.

57% of young adults would forego a guaranteed fixed interest rate when choosing a retirement provision if they had the prospect of a significantly higher return in return. This underlines the realistic view of the young generation. Only 43% would currently prefer fixed interest rates and guaranteed pension levels.

Future - optimistic, but uncertainty is growing
Young people's expectations of their personal future have deteriorated only slightly. Currently, 88% of the 17- to 27-year-olds surveyed believe the future will be "good" or "very good. Young adults are more pessimistic about Germany's future. The majority (53%) assess it as "less good" or even "bad. But young people also see growing uncertainties for their personal future. Doubts are increasing as to whether they will still be able to afford a good life in a few years' time. The pessimism is particularly evident when it comes to starting a family: "For the first time, we now have a study in which a quarter of young adults say they don't know whether they can financially afford to start a family of their own. That hasn't happened to this extent before. And that signals that young people are extremely sensitive to global developments. They are adjusting to them. But they don't want to let their basic optimism as a young generation be taken away," emphasizes youth researcher Klaus Hurrelmann.

Those who know more take better precautions
Anyone who wants to save and provide for old age needs financial knowledge. This is precisely what many young adults lack. Currently, 62% say they are "very well" or "well" versed in financial matters. The situation is different when it comes to retirement provision: in 2022, only 31% of young adults believe they have a "very good" or "good" level of knowledge on this topic. Almost nine out of ten (87%) think that retirement provision should be a fixed component of the school subject "Economics and Finance". Co-editor Christian Traxler emphasizes: "Those who do not come from a family that can pass on its economic potential and knowledge to their children usually also have a harder time with old-age provision. Financial education in schools can help reduce this social divide."

Klaus Hurrelmann's conclusion from the results of the current study: "Young people are very future-oriented and willing to do something for their own future - on the subject of pensions as well as on the climate issue. They are willing to change their behavior. But they also know that they can't solve the problems through their individual behavior alone." Heribert Karch sees the institutional players as having a responsibility: "Pension provision requires regular savings. Collective forms are needed for this. A company pension plan that is also financially supported by collective bargaining can do this better than any other model."

About the Youth Survey
The MetallRente study "Youth, Provision, Finance" is the largest representative long-term study of young people in Germany on the subject of finance and provision. The fifth edition was published in May 2022. Since 2010, around 2,500 young adults between the ages of 17 and 27 have been surveyed for the study at three-year intervals on their ideas for their personal future, their savings behavior, their financial knowledge, and their attitudes and personal strategies for retirement provision. The editors of the study are Prof. Dr. Klaus Hurrelmann, Heribert Karch and Prof. Dr. Christian Traxler. MetallRente collaborated with the Kantar Public research institute to collect and analyze the data.

Further graphics on the study can be found here: